The most incredible triple-axis tourbillion in the world 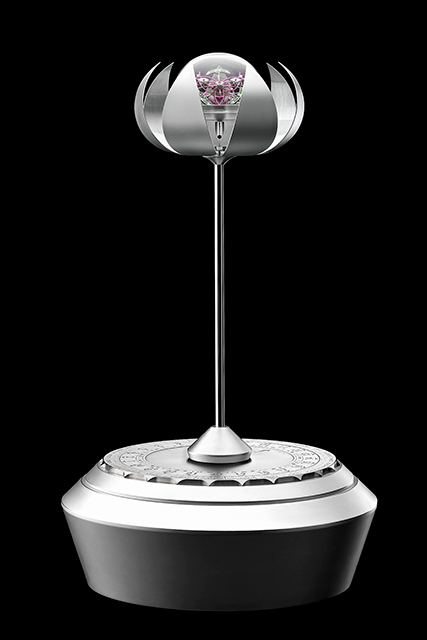 The Lotus clock is a new amazing project of an independent watchmaker Anton Suhanov. The idea of ​​a table clock in the form of a metal flower and its implementation is amazing.
The clock is a mechanical flower with a bud on a long thin stem, the petals of the bud open automatically during the day, freeing a glass sphere inside the bud, inside which, like a butterfly or a moth, a three-axis tourbillon rotates.
The familiar structure of the movement here is not just reworked and rebuilt, but turned inside out, and that seems impossible. The main movement is hidden in a round flat stand, on which the world time is displayed, from the center of which a long thin rod protrudes, crowning a bud with silvery petals. Like a living flower, the petals of a mechanical flower bloom during the day and close at night in accordance with the time of the home time zone, which is indicated with a hand on the central disc. Mechanical flower represents a day / night function for the home time zone. Inside the bud there is a glass ball in which a three-axis tourbillon hovers as if by magic and a second indicator as well.
The most important task was to "revive" the flower with the help of mechanical images and characteristic kinematics, and not due to external similarity (which was deliberately done with restraint and practically schematic). The petals close and open slowly and smoothly, like if it was a real flower, obeying the day / night period of the sun on Earth, symbolizing the continuity of the eternal life cycle. The complex vibration motion of the triaxial tourbillon carriages and especially the fluctuations in the balance in space personify the fluttering of a butterfly or moth sitting on a flower. And the use of patented Flaming Balance technology allows the balance wheel to glow in the dark, which combined with sophisticated spatial movement creates amazing glowing patterns. Through the combination of these movements: lightning unpredictable and long viscous-inevitable, you can demonstrate the beauty of the diversity of life forms. 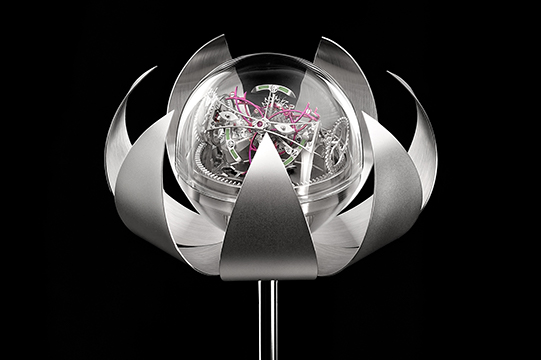 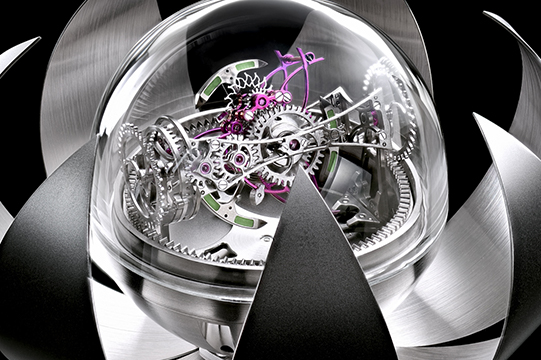 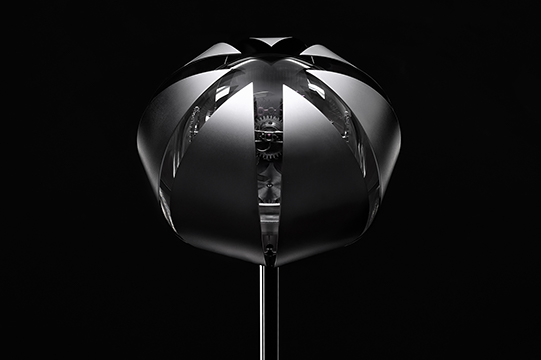 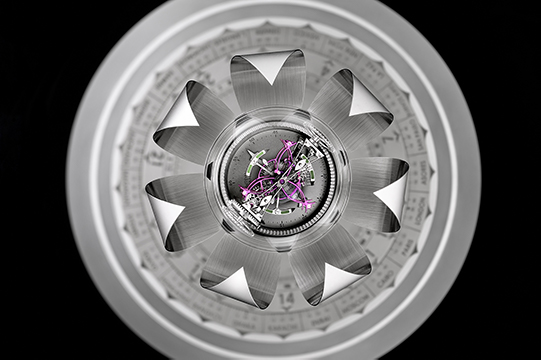 The flaming balance technology patented by Anton Suhanov is used in the clock. The idea arose in 2018 and was used by the master in his Pharos clock for the first time. This technology is the introduction of solid luminous inserts into the balance wheel from a special material, a significant part of which is luminous substance. When the balance oscillates at a certain frequency, the light track from the inserts merges into a light circle, thereby increasing the light area. Thus, an increase in the illumination area is achieved, but the complex spatial movements of the tourbillon carriage, in which the balance is concluded, allow you to create a variety of light patterns.

All carriages are completely made of titanium, which allowed to achieve amazing lightness and strength of the construction. That is necessary for stable work of the escapement at relatively high rotation speeds (the first carriage rotates 18 s / rev, the second - 21 sec / rev, the third 60 sec / rev) ... Titanium not easy to work with, but it has good corrosion resistance and looks great after finishing. Also, this material allows you to get a stable bright colored coating by anodizing, which was done on the first carriage, making it stand out in front of the rest, symbolically resembling an exotic butterfly.

An escapement unit - the escapement wheel and the escapement fork - has been specially developed for this clock. The development and production of escapement is one of the fundamental tasks of horlogerie. This task requires not only good theoretical knowledge, but also high-precision manufacturing of parts and high-class skill of a watchmaker. It is this unit, together with the balance unit, that is responsible for the uniformity of energy consumption, which allows the timepiece to measure time. Only a watch company that has developed an in-house escapement has the right to consider itself a watch manufactory.

Maximum attention is paid to the finishing of parts. Each part is created by hand by a master and is carefully finished. The blanks are finished according to the classic Swiss finishing standards. At the same time, we do not limit ourselves to old methods, but constantly come up with new processing methods, new combinations that allow us to further emphasize the nature and non-triviality of the design and appearance of the piece as a whole. Relying on centuries-old watchmaking techniques, we are constantly trying to develop new ideas in the field of finishing. It is this approach that allows horlogerie to develop endlessly in its perfection, conquering new heights. 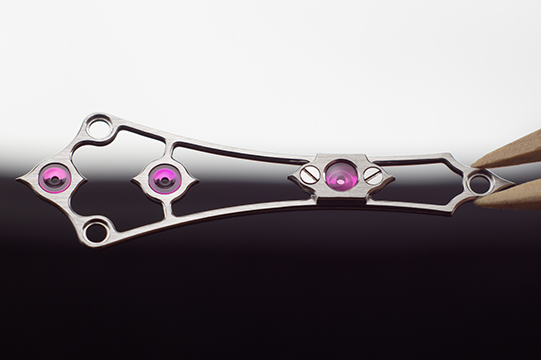 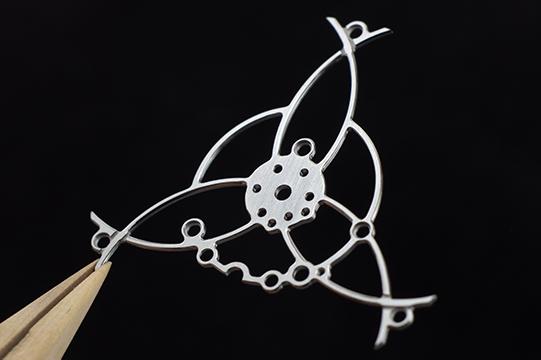 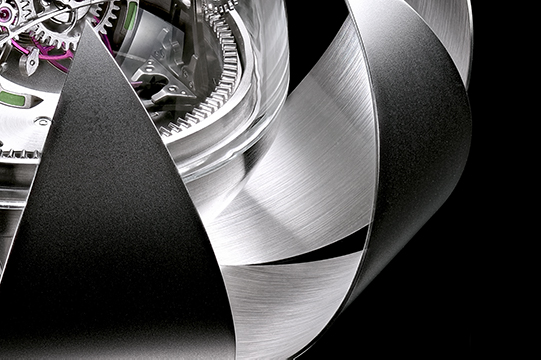 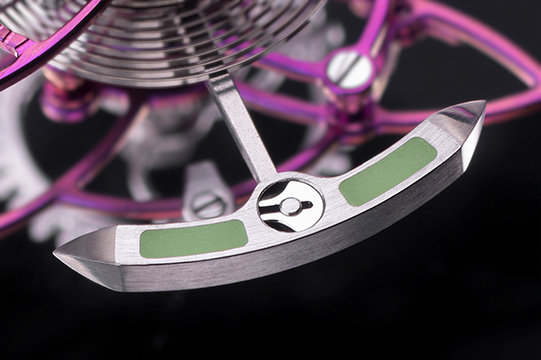 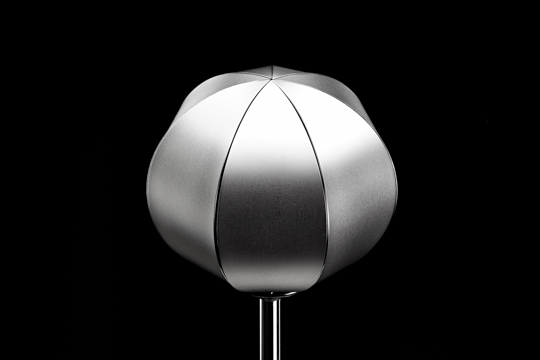 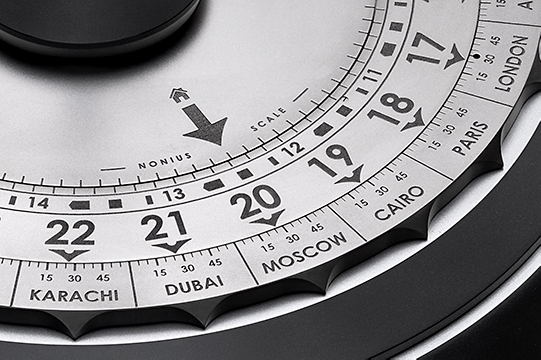 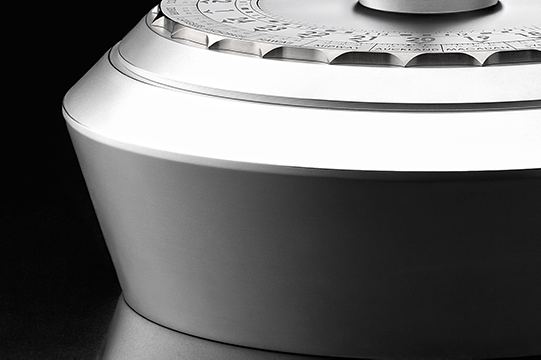 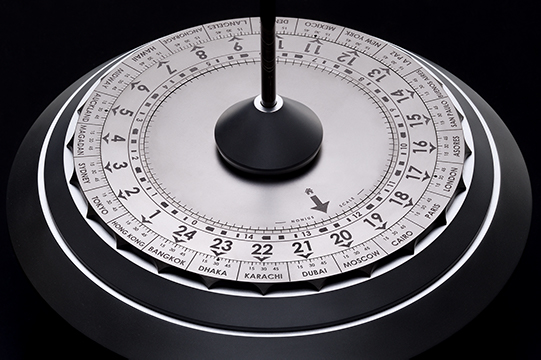 The clock case stylistically resembles an indoor flower in a pot. The discs on the upper surface of the base are made of titanium, which is more wear resistant and has a darker texture than the rest part (potted earth). Although everyone knows that a lotus does not grow in houses, and that after been plucked withers in three days, the form here is more an aggregated image of a flower. A flower is a symbol of beauty and life, people have always decorated their homes with flowers. The lotus is able to cleanse the space around itself from negative vibrations. The lotus aura emits such a powerful energy field that no dirt can coexist next to it.

The lotus was considered a sacred symbol in many great civilizations from Egypt to Japan. Since ancient times, this flower has been admired and adored, it is worshiped like a divine symbol. The lotus flower is mentioned in various religions, and everywhere it symbolizes purity, peace, fertility, longevity, health, honor and luck.
There are tons of stories about the wonders of victories of ancient Lotus plants over time. In 1881, during the excavations of the tomb of Pharaoh Ramses II and Princess Nsi-Khonsu, several dried blue lotus buds were found, which had lain in the ground for 3000 years and retained their color. In 1933, in the Kew Botanical Gardens near London, scientists managed to germinate seeds that were 1040 years old! And American scientists from the University of California at Los Angeles managed to grow a healthy young plant from a lotus seed 1228 years old, which was kept as a relic in one of the museums. Once in Japan, they found three lotus seeds in an ancient peat bog, the age of which, as shown by radiocarbon analysis, is about 2 thousand years and from them it was possible to grow a full-fledged plant. Such stories amaze the imagination, going beyond the duration of not only human life, but also the time of existence of entire states and peoples.
The combination of the incredible beauty of the Lotus and its ability to continue life even after thousands of years inspired the master to create a unique clock, in which he tried to implement this incredible image. In addition, it was 2020, when humanity suddenly faced serious threats, the lives of most people changed dramatically, and these changes caused uncertainty and fear for the future.
Therefore, like a Lotus flower (a symbol of purity and enlightenment), which is born in muddy swamp water, but comes into the world spotless and pure, humanity will undoubtedly overcome all the difficulties of 2020. And the Lotus clock will be a symbol of beauty and perfection. 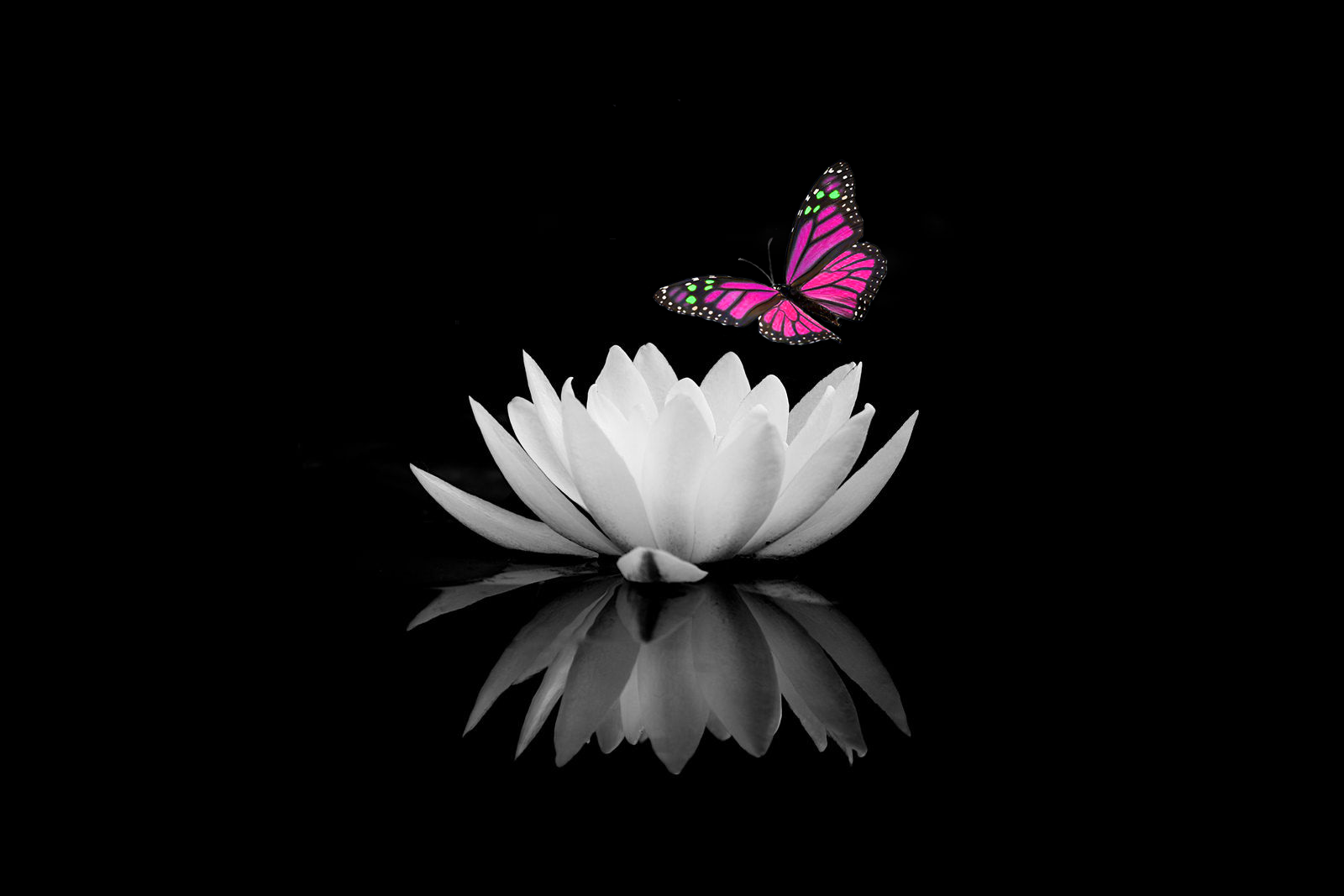