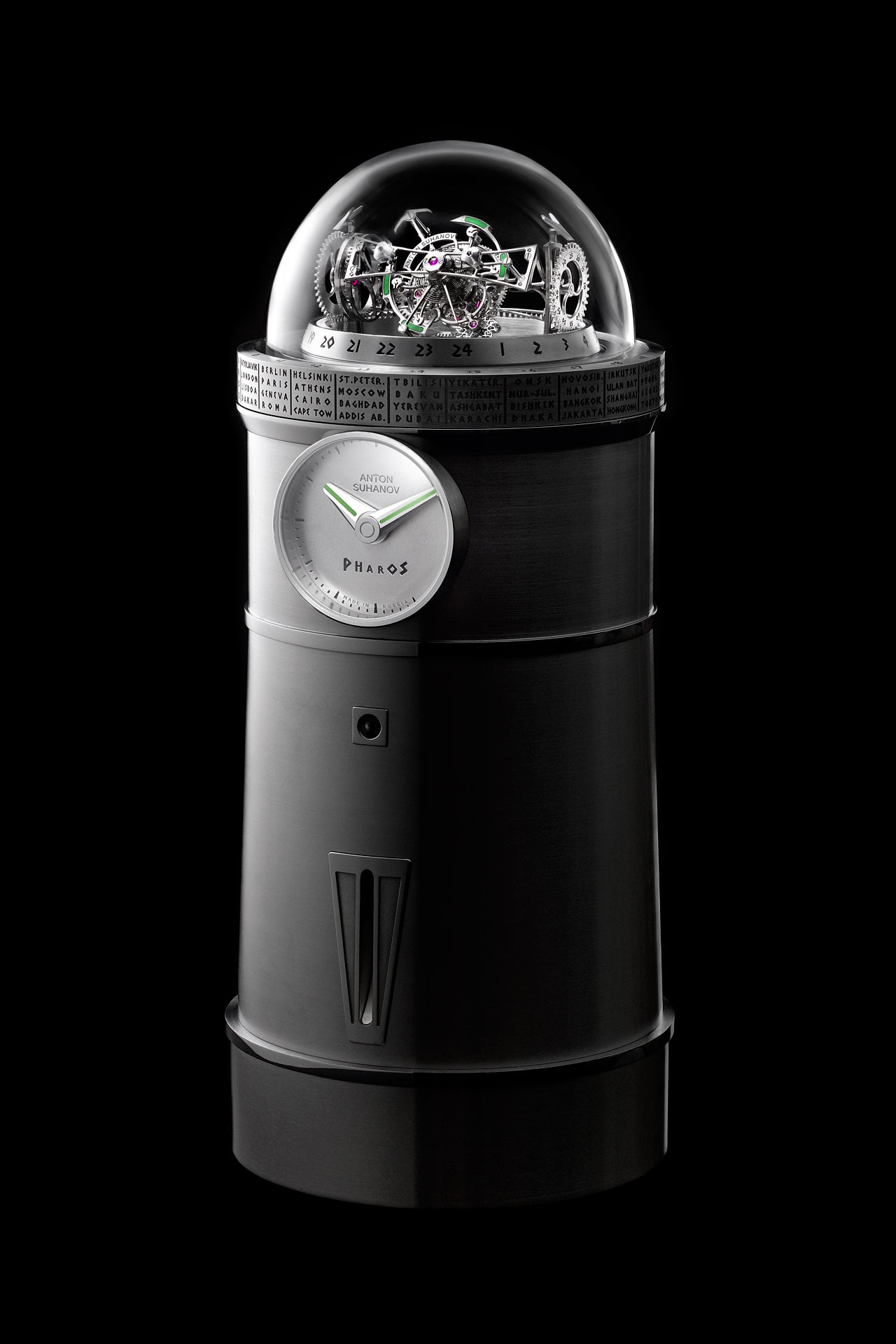 This clock was created inspired by the story of the Pharos lighthouse, one of the Seven Wonders of the World. However, the outlines of the clock rather repeat the shapes and proportions of the classical type of the lighthouses: a cylindrical oblong shape with a barely noticeable slight taper. The spirit of the discoverer and a firm belief in the limitlessness of human capabilities - that’s what the clock has in common with the legendary antique structure. This has meant having to revise the classical structure of the timepiece movement, develop it from the very beginning, weaving it into the concept of a clock, as an absolute reference point in time and space. For the first time in the world, the luminous inserts were used in the balance wheel in a three-axis tourbillon, which allows you to observe an incredible picture of an amazing flickering fire disk dancing in the dark.

The function of indicating world time in all the time zones and the largest cities in the world has been implemented more ambitiously than ever before. No matter where in the world this clock is, it makes this place the center of the world for its owner. A slowly moving power reserve indicator, like a sail of a ship passing by a lighthouse, reminds of the troubles of the floating world. Two second wheels also remind of it, in addition to their rotation also moving progressively around the center, showing the seconds indication on all the sides. 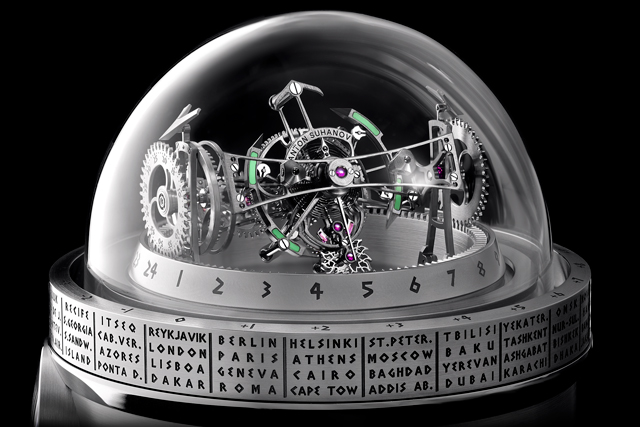 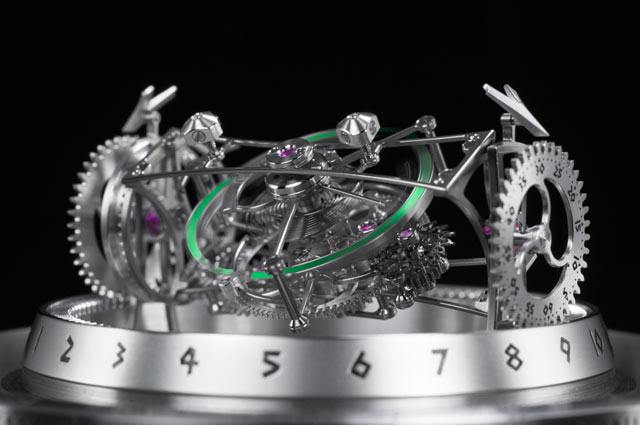 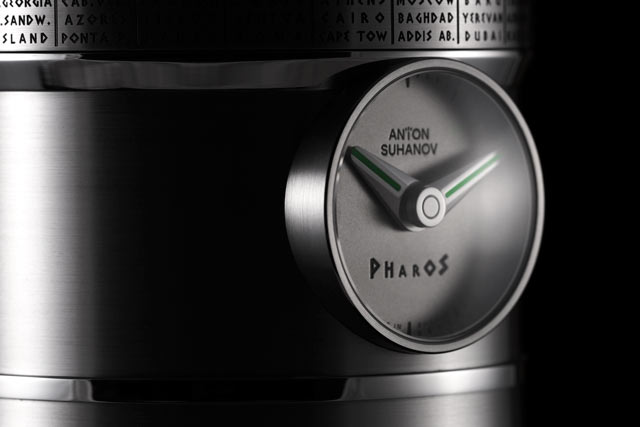 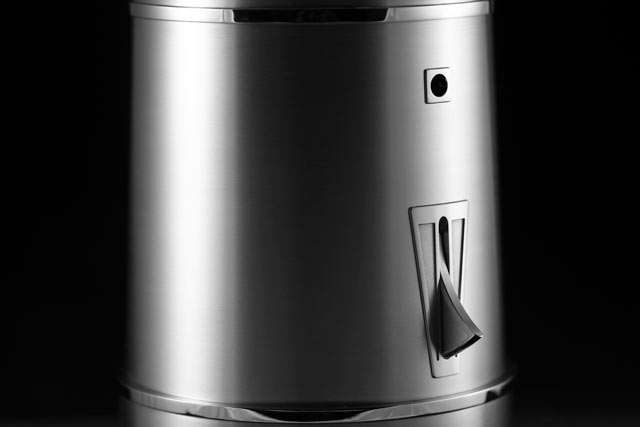 A unique balance wheel has been developed especially for this clock, in which luminous inserts are used for the first time in the world. Thanks to the rapid vibrations they turn the balance into a brightly flickering circle.

All the carriages are completely made of titanium, which allowed to achieve amazing lightness and structural strength

Unique escapement has a distinctive design, teeth of the balance wheel are made like the flames of an ancient fire that carried light, illuminating the expanses of the sea

Much attention is paid to the finishing of parts. Each part is processed by the master manually. The processing of the parts complies with classic swiss standards.

The case is made of stainless steel, which allows you to be sure of the strength, durability and endurance of the structure

Anton Suhanov was inspired by the story of one of the Seven Wonders of the Ancient World - the Pharos lighthouse - the only one that had a practical function. The lighthouse was built on a small island of Pharos in the Mediterranean Sea on the coast of Alexandria. The construction was named for the island. Work began in 285 BC and lasted a little over 20 years, and as a result, the Lighthouse of Alexandria became the first building of this type in the world and one of the tallest buildings in the ancient world (135-150 meters). Its light was visible at a distance of more than 50 km. It stood for a thousand years until it was destroyed by an earthquake. 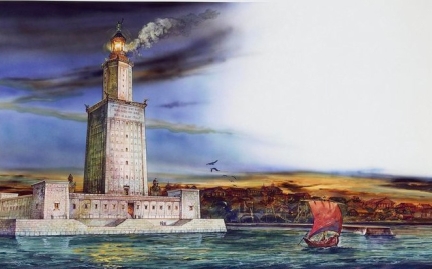 In the PHAROS clock, as well as in the ancient lighthouse, there is a constant work for their continuous functioning. Invisible, intense and slow work downstairs: inside the lighthouse, fuel and firewood were slowly raised upward along the large spiral staircase with the help of the wagons, and in the clock, through the slowly rotating of highly loaded wheels hidden inside the case, the energy is transmitted upstairs. Or fussy, but at the same time elegant work at the top: it was necessary to constantly maintain fire at the top in the middle of a system of reflective metal polished plates of the lighthouse; in the clock under the glass dome, the movement of all the elements of the three carriages is clearly visible, and in the very center of the dome, the balance blindingly flickers during the day and glows at night. The continuous rotation of the wheels, the movement of the bridges and the rotation of the carriages are chaotic at first glance, but in reality they implement coordinated work, the result of which is the oscillations of the located in the very center balance glowing in the dark and rotating around three axes.